DIVINE ORIGIN OF THE CELESTIAL POINT; TIME AND SPACE ARE MEASURED BY A DIVINE POINT; RELATIONSHIP BETWEEN THE HUMAN ACTIONS AND THE DIVINE AWARD; THE DIVINE LIVING SOLAR SCALES; THE NUMBER 318 AND THE HUMAN VIRTUES.-

Yes little son; so it is; just as your divine mind thinks so; the Celestial Sciences are about to be published; very son you shall see yourself surrounded by your honorable Dalai-Lamas; the world of knowledge shall be shaken; they do not imagine that the Lamb of God is son Earth; the same philosophy that emanates semana from the Celestial Sciences, is the divine Doctrine of the divine Lamb; for it is destined to living creatures; it is the same divine comforter announced by the First-born Solar Son; which in the Most Holy Trinity are the same thing; they are proper laws of the Holy Trinity; whose divine free will is the most sublime and divine loving communism; the divine justice works by means of common love for everybody; therefore, the philosophy of communism is in the laws of creation; it has always been there; and the children who struggle for a similar philosophy on Earth, are very advanced spirits; they recognize that only one unitarian knowledge is the most fair; the greatest thing about this philosophy is that they fulfill the divine law of work; which your divine Father Jehovah expressed in other terms: Thou shalt earn thy bread on the sweat of thy face; what I meant was: It will cost you a lot to earn your daily living; for your world shall be invaded by the demons of ambition; who make the progress of the worlds a damned business; if the Earth did not have this damned exploitative demons, it would certainly be like a paradise; even more; the Earth would not have had the need of a Final Judgment; for the divine points of the philosophy of work would have overcome the own spiritual destiny; above all craftwork; but, since the moment these demons invented the damned money, without consulting my divine Scriptures, it became the worst yoke that humanity has ever known; for my flock was divided in rich and poor; within an obliged exploitation; and perpetuating injustice; the divine moment in which the world shall get rid of this yoke has arrived; which makes the generations of the planet only shed tears; and the bitterer tears are still to come; when millions and millions of creatures see that because of money they changed their own feelings; they became proud, false, interest-driven, and even criminals; and when they see that each second of time of their own lives has been closing their entrance to the Kingdom of heavens; for no points has money given them; on the contrary, because of money they will have to confront the divine judgment; within a crying and gnashing of teeth; envying the own dead beings; and they shall see that because of having known money, they will not be able to be resurrected in flesh; in the year 2001; for it was written: It is more likely for a camel to pass through a needle’s eye than a rich to enter the Kingdom of Heavens.- 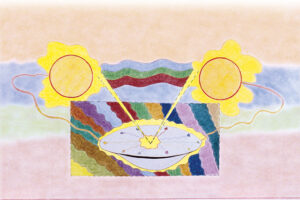