Yes little son; we shall continue with the divine philosophy that my divine Commandments teach; if all humanity had led themselves by them, I assure you little son, that this humanity would not have the need of a divine judgment; the divine Commandments were given to the world so that every spirit would do their trials in life through them; there was a given instant in which every spirit did not know any life in the worlds of flesh; but they knew that sooner or later they would try a determined philosophy; not only a human philosophy; for the trials on the planets are infinite; they shall never have a limit; nor have they ever had it; the divine Lamb of God is the divine mandate of love and humility to every thinking creature; among all the wrongly called animals, only the divine little Lamb represents the only innocence; for it is alien to any act of force; its sensibility has given it a divine preference in the divine Father Jehovah’s free will; humility is in the divine Lamb; and without humility, nobody enters the Kingdom of Heavens; it is written that it is more likely for a camel to pass through a needle’s eye than a violator of my divine law to enter the Kingdom of Heavens; every human spirit talked to the divine little Lamb, before coming to the trials of life; all the human spirits praised it in the Kingdom of Heavens; it played with everybody in the Celestial Dwelling; for in there every son is not an animal; everybody is the son of the same Father; whichever his physical form or philosophy may be; in the Kingdom of Heavens everybody is telepathic; for everybody has attained the eternal Glory; which costs infinite sweat of faces; in infinite planets; for it is written that every spirit has to be born again to be able to enter the Kingdom of God; this means that every spirit has got a pilgrimage through the material universe; it goes through infinite planets; it tries new infinite philosophies; and all of them are one of the divine forms that the Divine Lamb of God takes; the divine solar innocence has got a form; for everybody has got the same principle; nobody is born big in the Kingdom of Heavens; for nobody has got the total eternity; but only the Father; everybody with no exception at all is divinely subordinated to the Divine Father’s love; and this divine love is living and expansive; the Father progresses and so do the children; keeping their divine spiritual hierarchies through eternity.- 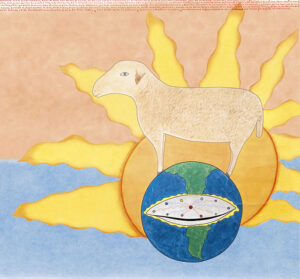