TELEPATHIC MESSAGE FROM THE ETERNAL FATHER TO THE TERRESTRIAL WORLD; SECOND MESSAGE; THE FIRST MESSAGE WAS HIDDEN FROM THE WORLD BY THE RELIGIOUS ROCK.-

Yes children; one is born searching for the truth; it is initiated for the world of knowledge, the Revelation awaited for centuries and centuries; your Creator makes use of living Doctrines to make the worlds advance; in the past He sent you the Mosaic Law; then came the Christian Doctrine; the third one, which is being initiated, is the Doctrine of the Lamb of God; this Doctrine will also be called Celestial Science; its origin lies on the same elements of nature; the Telepathic Scripture is the means of communication which the Creator of the Universe makes use of; it has always been like that; in the past the doctrines of the prophets were received by telepathy; because everything has an origin and a cause of being; the Doctrine of the Lamb of God has no ending; because the Universe does not have it; and for the same reason it will be spread all over the Earth; it will be translated to all the languages of the world; its influence will be such that it will make the exploitative materialism fall; because a new Morality is coming to the world; the Morality pertaining to the Millennium of Peace; The Doctrines of the Eternal Father always transform the worlds; just as it happened in the past of the Earth; the New Revelation was requested by the present human spirits; and it was granted to you; every instant lived in your existences, was requested and was granted to you; the New Revelation is the continuation of the Holy Scriptures; one thing is being studious of the Scriptures, and another being religious; the first one is eternal because your spirit always searches for its own origin; the second one is the commerce of the faith; the religions are the first ones to be accused before the world; in the Doctrine of the Lamb of God; the so called religions in their human morality have divided the world of faith; they have no right to do such a thing; they have forgotten that there is just one God only; just one sole truth; only satan divides himself; the religious spirits are the same pharisees of the Roman era; they requested the Creator to be born again to mend errors from the past; and the trial was conceded to them; do not forget all religious people of the world, that every spirit is put on trial in the destiny that he chose; you spirits of the rock did the same thing in remote worlds; you divided other flocks; you left spiritual confusion in other creatures; you filled many planets with material temples; and you did it again on the Earth; that is why you will be the first ones to be judged; you by violating the law become the same anti-Christ; and every violator of the Commandments, in fact is so; you say the holy mother church; I say to you that nobody in this world is holy or saint; the real humility does not need titles which are unknown in the Kingdom of Heavens; even your microscopic planet is so; only the Father and certain prophets know the planet-dust called Earth; the cause of it is that the living Universe of Father Jehovah has no end; and whosoever thinks of being big, he is not; for you was written the word prostitute; because you trade with my divine Law; blinds leading other blinds; who transmit your errors to other blinds; when the New Doctrine spreads, your rock of spiritual selfishness will be divided; the word rock does not symbolize the eternity of anything; the Earth is relative and not eternal; you believe that your church is eternal; the events that will come will get you out of this error; only the humble at heart, have eternity achieved; not those who teach morality within immorality; when my First-Born Son said in the past of the Earth: Upon this rock I shall build my Church, he said so by seeing the Future of humanity; for the Solar Trinity is everywhere; it is also in the living times: Past, Present, and Future; and what did he see? He saw all your violations; he saw how you persecuted innocent creatures; because they did not share your ideas; he saw how you sent them to the stakes; he saw how you persecuted great studious and writers; just because they made you see the error; he saw how you crowned terrestrial kings; knowing your selfish rock, that there is only one King of kings; the divine Father; the One Who gives and takes life away; the title of King is of the celestial world; the demon is called spirit-king; the Commandments do not teach to become kings; they mandate to be humble above everything; he saw how you blessed the arms with which the Father’s children kill each other; knowing you demons, that the divine Commandment says: Thou shalt not kill; he saw the commerce of faith; and he saw every immorality in your spirits; it would have been better for you not to have requested to be born again before falling into violation again; your religions are unknown in the Kingdom of Heavens; and every morality that pretends to divide the faith of the Father’s children is unknown; the only temple known in the Kingdom is the Temple of Work; work is the oldest mandate that exists; before your microscopic planet was born, work was and is practiced in colossal worlds; the temple of work is never reduced to dust; your material temples do get reduced to dust; and with it the material adoration on this planet disappears; an adoration which should have never been taught; because of this adoration which lies in hypocrisy, you have delayed the world’s advance in twenty centuries; in their moral and spiritual plane.- 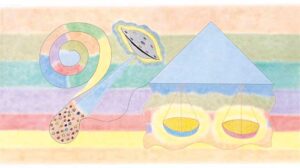