And God said: Let there be expansion amongst the waters; and let the waters separate from the waters: It means that the molecules of the waters had a growth or expansion; each molecule has a free will; and they are independent from each other; and they are conductors of their own form at the same time; all of them form covenants; the Ark of Covenants is their celestial symbol; the entire nature is represented in the Ark of Covenants; the term Ark means Assembled in Geometry; and it is the most representative of matter in the Kingdom of Heavens; there are infinite ways of expressing the Father’s creation; for in Him there is no limit whatsoever; for the Father a molecule is a universe; He sees what nobody sees; for He is where nobody is; the first waters were not like the present ones, they were instead liquid gases; which contained multitudes of gaseous beings; never seen by human eyes; these gaseous beings had powers of fire; for in that amazing epoch, everything boiled; everything turned into heat; that heat is now reduced to the central fire of the planet; and all of you also got saturated of heat; Does your body not have calorie or temperature? Many may ask themselves why; for man had not been born yet; the truth is that while this was taking place, from the same heat and in an invisible form, the first creatures of flesh were being born; it was the first birth; the first reincarnation; this divine process continues taking place in the own cosmic elements; matter’s free will makes nobody notice its own process; the term: And let the waters separate from the waters has an eternal meaning; the best way of showing a free will is with the movement of waters; one never knows what determination there will be in its own movements; the free will is so fine and delicate in its composition that only the Creator touches it; and He never does it without a reason; for it is His own creation; He wanted to say at the same time: Free will you are free; for your Creator when He creates worlds, He does it by talking to the elements; and all of this takes place within a joy that is unknown to you; a joy characteristic of the psychology of the children of your planet; the favorite psychology of the Father; as one who does not create and expand his own psychology, does not enter the Kingdom of Heavens; never have the apathetic spirits entered; to be entitled to enjoy happiness one has to cultivate it first; just then you can claim for joy in the Kingdom of Heavens; if you did not cultivate it on Earth, what right does assist you to claim for it in the Heavens?.- 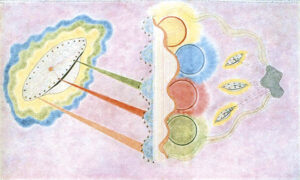