DIVINE ORIGIN OF THE TERRESTRIAL SOLAR SYSTEM; THE NUMBER 318 GETS EXPANDED IN OTHER PLANETARY COVENANTS; WHAT IS UP ABOVE IS THE SAME AS DOWN BELOW; IN THEIR FIRST CAUSES; GALATIC ORDER OF THE WORLDS.-

Yes little son; I will explain to you the Solar System; this galactic name is correct, only for the Earth’s evolution; for the Kingdom of Heavens, this name does not count much; for the Solar System and the universes close to the Earth, are almost unknown in the Kingdom of Heavens; the Earth is a little less than a molecule; and its creatures acquire unprecedented proportions; and nobody thinks about wealth; everybody thinks about the universal knowledge; everybody thinks about creating worlds and to offer them to the divine Father; everybody is a Microscopic imitator of my divine creation; nobody is idle; everybody participates in the laws of the Universe; an infinite totality is spoken about; the destinies of the spirits are Planned; and of the worlds; a divine hustle and bustle is seen, as no human eyes have ever seen; only you, divine son, have the divine mental power of seeing what you see every day; for you are from the Kingdom of Heavens; and as such, your divine Telepathic Scripture shall be eternal; it is in you; and it shall sprout from you from world to world; one knows the tree by its fruit; if all of those first children I introduced to you would have guided themselves by this divine parable, they would have been the most joyful creatures on this planet; they would have been among the first ones in the divine Revelation; their own skepticism makes the doors of the Kingdom of Heavens close on them; no skeptical being shall enter the Kingdom of heavens; only the advanced spirits enter; those spirits who because of their own spiritual advancement, do not need material proofs; they simply believe; they believe that nothing is impossible to the Creator of life; the own faith transports them to the Kingdom of Heavens; that is meant by the divine parable: Faith moves mountains; almost all the skeptical beings are like the divine Thomas; they need to see in order to believe; saint Thomas showed that he was a backward spirit; he requested proofs of the world; he did not request eternal proof; his belief was reduced to a proof of one instant; he did not see beyond; therefore, those who say: One has to see in order to believe, are mundane spirits; they request proofs that show their own spiritual backwardness; if these creatures do not believe in the resurrection of the flesh in the year 2001, they can say good bye to being eternal; they have received their awards in advance; the skeptical beings should not forget that nobody reads his future; that is much better to be quiet and humble than a false prophet of his own eternity.- 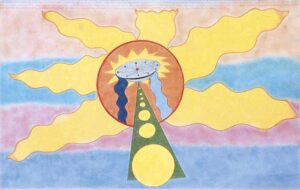